In honour of Coach Felix Gonzalez 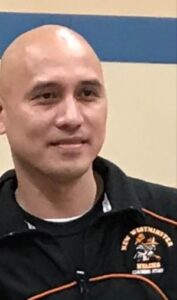 It’s with a heavy heart and profound sadness that our Hyack family share news of the passing of one of our long time coaches: peer and friend Mr. Felix Gonzalez.

Felix passed away suddenly, on Feb 22, 2021 after a medical emergency. He was surrounded by his family and community in prayer – along with his basketball family including coaches, players and fellow officials who had learned of his condition.

Felix was a long time basketball coach for New Westminster Secondary. Over the many years of coaching he became synonymous with Hyacks Basketball in the community and the inter scholastic circle.  He coached many different levels of Hyacks Basketball and was successful in winning leagues, banners, tournaments and attending Provincial Championships.

On and off the court he was respected by players, peers and parents for his commitment to providing athletes a chance to play and grow as players and young adults.

In addition to coaching for the Hyacks, Felix was an extremely accomplished official at the highest levels of basketball in Canada, having officiated at the Canada West, U-Sports, PACWEST levels and at numerous Provincial high school tournaments.

As a coach and official he was a well-liked by those he came in contact with. He will always be remembered for his passion, dedication, warm smile and friendly personality on and off the court. Being a former star player made it easy for him to be firm and fair with all participants.

Coach Felix will be missed but never forgotten!
Thanks for allowing us the opportunity to be your friend!